With Christmas just around the corner, we have been reading the story of “The Elf on the Shelf,” which comes with a toy version of the elf.  Ours is called “Chippy”.  A name as irritating as his smirk.  Chippy sits quietly in various places around the house with that screwy smile on his face, and gathers counterintelligence for Santa. He then allegedly reports said intelligence to Santa personally, on a nightly basis by way of magical flight.  The point of this is quite clear, to influence behavior, turning naughty into nice out of concern for gift reduction.

In years past, I haven’t found Chippy to be particularly effective.  However, this year, my two charges (ages five and three), have stumbled upon a feature length, made-for-TV move about Chippy, Santa’s eavesdropping elf.  After the show, the five year old looked worriedly at our little elf, who sat leering down at us from a bookshelf, and then looked at me.  Wide eyed, he whispered, “Nanny…he’s really real!  I thought he was just a book!”

“That’s right, I said.  And he’s talking to Santa every single day, to let him know if you are being naughty or nice.”  Might as well ride this pony as far as it will go, I figured.

The tots looked anxious as they silently recounted their crimes for the day.  But lunchtime came, and their personal transgressions were quickly replaced by chicken nuggets…the absolute nectar of toddler-gods everywhere.

Immediately following lunch, as I bent over to pick up a dropped spoon, I spotted something strange under the table.  Sitting in an oddly perfect line, directly under the table leg, were a good number of carrots, two petrified meatballs and one mushy tomato. 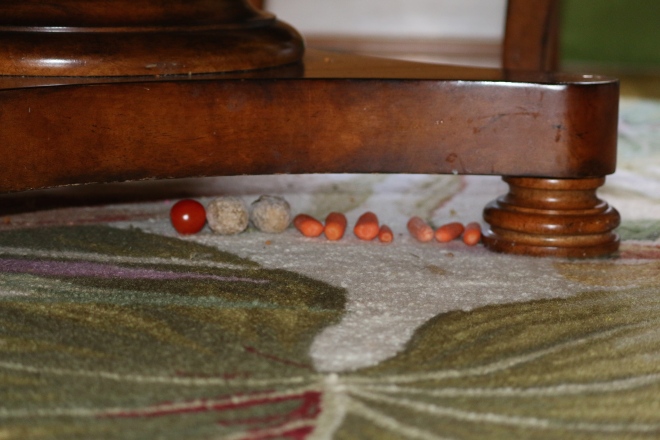 I understood the strange scenario immediately.  “Sweetheart,” I said to the five year old boy.  Have you been hiding your food under the table?”

He smiled briefly, aware that he had been caught.  Then said, as if to ease my mind, “Don’t worry, Nanny.  I don’t hide the good stuff, only the icky stuff.  Besides, Mommy and Daddy don’t know I am hiding my food, so I still get a treat every day!”

“Ah-hah, I see…good plan, good plan.”  I say, nodding my head in agreement.  “But…what about Chippy?  He knows you are doing it, so that means Santa knows.”

He freezes, drops his dinosaur and sprints to the bookshelf where Chippy sits watching.  He is panicked and breathing hard, which gives me a moment to sneak up behind him with my phone and film the desperate plea for atonement that went something like this:  “I’m sorry I was naughty.  I really want dinosaurs for Christmas.  PLEASE tell Santa to put me back on the good list.”

Okay Chipster…I’ll give it to you.  Satisfactory work, given the circumstances.  However, those of us who slave away every  day, shaping the behavior of our world’s youth, cannot afford the luxury of doing so a measly 2-3 weeks a year.  No Sir!  No more seasonal work for little Mr. Chippy!  Our house elf will sport bunny ears, turkey feathers, a tooth collection bag, and he will spy for every gift giving figure known to modern man!

Then…and only then, you might begin to earn that wildly abrasive sneer you wear upon your little plastic face.

Running across the street right now to pet a dog!

A blog full of humorous and poignant observations.

The Shameful Sheep
Writing for Kids (While Raising Them)

A blog by Robyn Christi

What is done will not be always dead.

Trying to figure out how to be a wife and a mother, while surviving in North Idaho.

Of Life and women.

Write the story of your life, that time won't forget.

Learn about Goan and Indian Recipes

It Takes a Whole Village